A group of my speech students ready to hear the proceedings during the Senate Education Committee hearing on February 15th.


I am feeling a bit like this writer as I watch the amazing videos and photos that were shared today from yesterday’s historic day in Springfield. 4000 homeschoolers gathered outside our state capitol to express their opposition to proposed SB136 which would require registering all homeschooling families in Illinois. In the immediacy of the moment while trying to accurately share what I was hearing from the Senate floor via my Facebook page, somehow I had missed the loveliness of what I know to be our central value: families committed to each other and committed to homeschooling! Now seeing these precious families lining the hallways under that beautiful rotunda and hearing their sweet voices singing, laughing, and sharing the freedom we have as homechooolers, I am a little wistful that I wasn’t outside!

I will be blogging about my personal thoughts about this in the days to come but wanted to first share my overall impression of the actual hearing and the possibilities I think it could offer to us along with some of my concerns.

There is some confusion today and it is being reported that Senator Maloney withdrew SB136. Actually, he had decided early on that he did not want to include private school students, as originally planned, and to place these restrictions only on homeschooling families. Yesterday’s Senate Education Committee meeting was for the purpose of hearing testimony on both sides of the idea of mandatory registration of homeschooling families. There were several things that came out of this meeting that were disconcerting to me and give me pause as to the direction this might take:

Many of those who make laws that affect homeschoolers are fairly ignorant of the actual laws and court decisions involving the education of homeschoolers. One senator even stated that homeschoolers have no standards required by the state, ignoring the very ones outlined in the actual law. This was handily corrected by one of the attorneys present. Frankly, I was amazed at the lack of coherency in some who spoke. I had several of my speech students with me who were amazed that elected officials who run for office weren’t better prepared, both in content and in presentation.

Bill Reynolds, a truant officer from southern Illinois testified that he believes all homeschoolers need to be registered so he can know where there are problems because he “wants to help” homeschoolers. Wasn’t it Ronald Reagan who said “The nine most terrifying words in the English language are I’m from the government and I’m here to help?” When asked how that would be accomplished, Reynolds said only by registering all homeschoolers and having the authority to enter all homes. He went on to say that he would be able to recognize those who were doing a good job when he walked in the door by the fact that there were books around the house, etc. He was clear to differentiate between the “cream of the crop,” ie those demonstrating yesterday, and those who “fall through the cracks.” How much sense does that make? How does he know we are the “cream of the crop?” He hasn’t been in our homes or talked to any of our children or looked at our books! The best part of his discussion was when one of the senators asked him “How do you expect us to write all that into law?”

Another school administrator told one anecdote of a child from his school district who was supposedly homeschooled but he had no way of knowing it was true because he couldn’t find the family. He pushed for registration for this reason! He was quite emotional and concerned “for the children.” He also suggested that there should be qualifications for parents who homeschool but all those in favor of registration agreed that that would really be difficult to do. After hearing his testimony it is clear to me that the real problem, if, in fact, it is a real problem, is NOT homeschoolers. It is impostors who use the word “homeschooler” for whatever reason. Why should there be restrictions on all families because someone is choosing to use our name? Perhaps this is a situation of identity theft. And how did he know the family missing from his system wasn’t actually homeschooling if he couldn’t find them? This was the “evidence” that caused Senator Maloney to call for this discussion.

One of the senators stated that she doesn’t personally know any homeschoolers, which prompted an open invitation from the entire hearing room for her to get to know us! I believe many school administrators and legislators have no personal stories of their own that make a case for homeschooling because too many people have been fearful of taking the time to get to know those they perceive to be the enemy. We need to change this. I am not talking just about showing up with a cherry pie on legislative days where we stop in to meet a representative or working on someone’s campaign. This can be difficult and in some situations might not be wise, but I think we could make a better effort to engage with those outside of our homeschooling circles. I know that our own family has been exceedingly blessed by becoming friends with a variety of people who share different life experiences and perspectives. Some of those people are now our greatest supporters and some have even offered to write letters and testify on our behalf if need be. We know how charming homeschoolers are. Let’s share this knowledge!

I left with the distinct impression that there were three senators on the committee who supported our position. I know of several others who also oppose the registering of homeschoolers as well as quite a few members in the House. While some of the questions that came up during the hearing are disconcerting and will perhaps invite more people to want to look for bad stories to support their views, I keep remembering what it would take to actually get this placed into law! We need to pray for the legislation to be stopped before it goes any further and prepare to continue fighting if it is isn’t!

As the meeting closed, Senator Maloney’s final remarks came with some obvious emotion. Perhaps he was feeling the pressure of the 4000 homeschoolers in nearly every square inch of the capitol building and on the lawn. Maybe he was moved by the sweet presence of babies and delightful children of every age alongside moms and dads of conviction and courage. And then there’s the fact that numbers make a great deal of difference to politicians who like to be re-elected. Maybe he was pondering the 2 hour discussion he had just heard where those testifying on his behalf betrayed an agenda of further control and bureaucracy, aware that the Illinois electorate has reached their limit of big government and taxation. Maybe thoughts were going through his head about how they would pay for these new regulations. (My elderly mom asked me if they would charge us for registration, like they do for license plates. Shhhh, don’t give them any ideas!) For whatever reason this man was visibly moved, I would encourage us all to pray for him and for the other members of his committee, that the Lord who holds the heart of the king in his hand will move them to do the right thing. 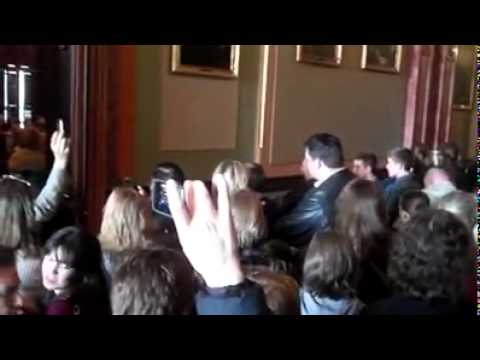